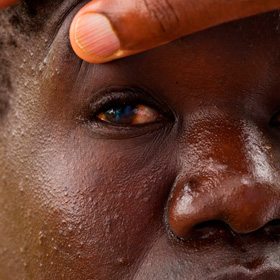 Despite the fact that cataracts are highly treatable and one of the most cost effective procedures in medicine, the condition remains the leading cause of blindness in the world. In South Africa the backlog of people blind or partially sighted due to untreated cataracts stands at an estimated 240,000.

With the exception of the Western Cape and parts of the Eastern Cape, government services for cataract surgery are unable to meet demand. Many public hospitals do not have ophthalmologists or are understaffed due to posts not being funded. This, coupled with the high incidence of cataracts in South Africa, has resulted in a severe backlog of patients requiring surgery – with many remaining on a waiting list for well over a year.

What is a cataract?

A cataract is a clouding of the crystalline lens in the eye (the part of the eye that focuses light and produces clear images). This clouding is caused by a build-up of protein in the lens preventing light from passing clearly through it. As new cells form on the outside of the lens the older cells get compacted into the centre of the lens. Over time, this process causes a gradual, progressive decrease in vision and eventually leads to blindness.

Cataracts develop for a variety of reasons, including long-term exposure to ultraviolet light, exposure to radiation, eye injury, genetic pre-dispositioning, advanced age and secondary effects of diseases such as diabetes.

During the initial stages of cataracts the steady deterioration in sight prevents patients from recognizing faces or finding their way in unfamiliar territory. As the condition progresses to blindness, the individual requires more and more care and becomes increasingly unable to gain employment, generate income or function independently.

The cost involved in caring for a blind individual, both in time and lost wages, places an economic burden on the family and the community. In many poor communities young children are often taken out of school to look after the blind individual, thus depriving the child of education and perpetuating the cycle of poverty.